My grandma’s chicken and dumplings are full of delicious flavors and are made with a homemade rolled-out dough, lots of chicken, and a thick sauce.

This post contains some affiliate links. If you make a purchase after clicking a link, sometimes I earn a small commission. However, there is no additional cost to you. Please read the disclosure policy for more information.

The temperatures have dropped from the mid 70s into the 30s within one week. I really wasn’t ready for such a drastic change in temperature—I feel like fall was only around for a couple of weeks. My husband works outside all day, and I know it’s difficult to stay warm when the temperatures drop so low. To help warm his belly, I made one of his favorite dishes—my grandma’s chicken and dumplings.

When I make this recipe, we have plenty of leftovers and Russ loves taking them for lunch. I pack his lunch everyday, and I recently discovered a Thermos

that keeps his food hot for up to 14 hours. This fantastic Thermos

kept the chicken and dumplings hot until lunchtime, which was six hours after I packed it. He told me his food was not just warm, but really hot.

Here is how I keep his food hot until lunchtime

In order for his chicken and dumplings to stay hot until lunchtime, I heat water to boiling, pour into the Thermos

, and seal the lid. While the boiling water sits in the Thermos

. Voilà! This food is hot until lunchtime.

How I made the chicken and dumplings

The recipes calls for one whole boiled chicken. I decided to take a shortcut and cook mine in my new Instant Pot—it only took 25 minutes. I put a whole chicken, along with some chicken legs (because we really like dark meat) into the pot. I added a quart of chicken bone broth, and I turned the Instant Pot on manual for 25 minutes. I released the steam valve immediately. The chicken was perfectly cooked!

The secret is in the dumplings

I mixed one cup whipping cream, two eggs, and two teaspoons of salt. I gradually added enough flour to make a very soft dough—it will be very sticky. Then, I put flour on the countertop and about half of the soft dough. I kneaded flour into the dough until it was no longer sticky.

Once the dough is no longer sticky, begin rolling out on a floured surface. The secret to these delicious dumplings is rolling the dough paper-thin. Cut the dough into small pieces, about two inches by two inches. Also, make sure the dough is generously covered in flour, because this will help thicken the broth. After cutting my dumplings, I put them on a plate so I can easily put them in the broth.

Bring broth to a boil. Add dumplings one at a time, making sure the dumpling just added swirls around enough so it won’t stick to the next dumpling. Continue adding the dumplings until your broth thickens to the consistency you want. Add deboned chicken.

The delicious chicken and dumplings

Sometimes I use all of the dough mixture, and sometimes I don’t. It depends on how much broth I have. However, you can add more chicken broth if your chicken and dumpling mixture ends up too thick. However, I prefer a thicker sauce, so I typically don’t add extra broth.

I hope you and your family enjoy this chicken and dumplings recipe as much as mine does. 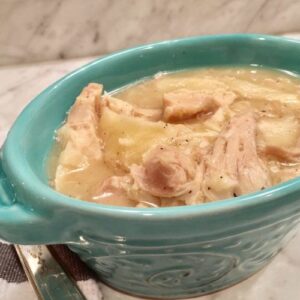 My grandma's chicken and dumplings are full of delicious flavors and are made with a homemade rolled-out dough, lots of chicken, and a thick sauce.
5 from 2 votes
Print Recipe Pin Recipe 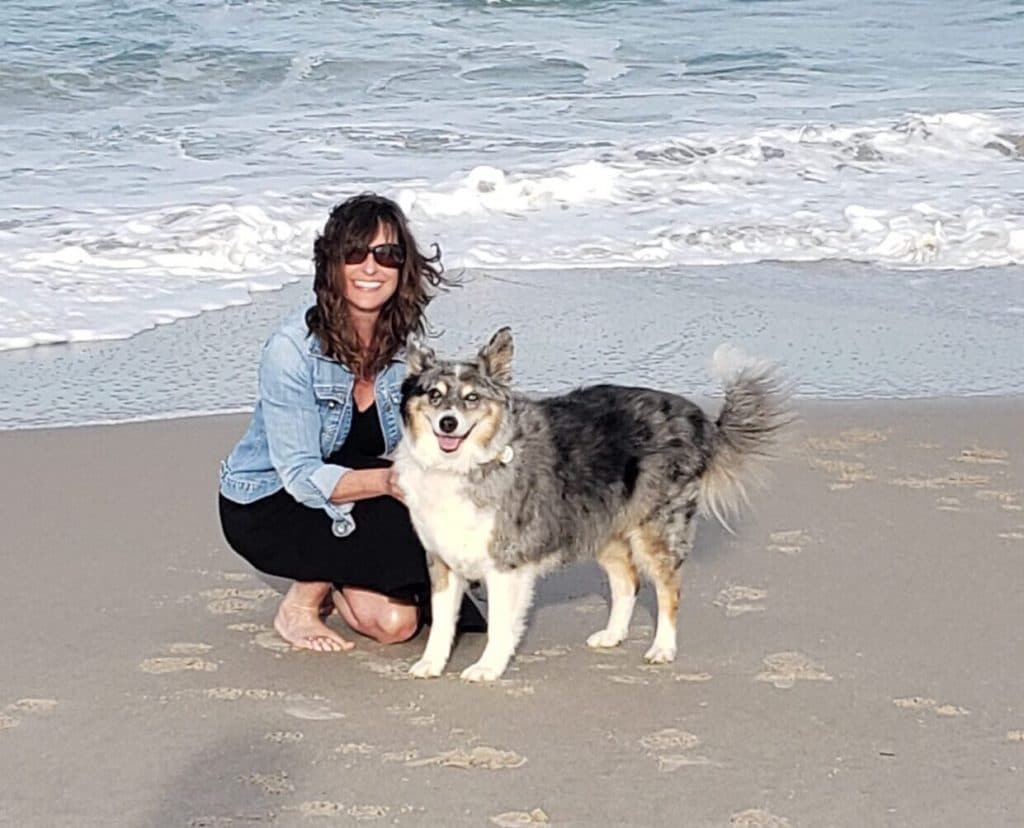